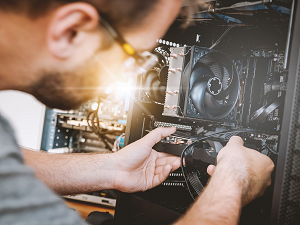 In December 2019, the covid-19 pandemic began, and it spread across the globe in early 2020. To curb the spread of this deadly virus, lockdown tactics were employed. Companies all over the world responded to this situation by having their employees work from home. This led to a great increase in the remote workforce and consequently the rise in PC sales. This kind of rise was last noticed in 2010.

PC hardware producers such as Acer, Apple, Dell, Lenovo, and so on have noticed an increase in demand for their products. Lenovo got back the top position in the hardware PC market during the third quarter of the year 2020. They had an 11.4 percent percent increase in sales and shipments attaining more than 19 million units.

HP rated next, with a growth of around 23.6 percent and shipments summing up to 18.7 million. Dell attained the third position despite a 0.5 percent decline in shipments compared to 2019. Apple had a growth of 13.2 percent and ranked fourth, while Acer claimed the fifth position with an increase in sales of 15 percent. Ryan Reith, the program vice president, worldwide mobile device trackers said the rise in demand in the PC market would last.

According to the NPD, notebook and laptop sales increased by 10 percent in the first week of March 2020. They claimed that this significant rise in sales was due to the shift to working from home. A 14 percent decrease in the sales of mobile devices was also noticed due to the quarantines that made people consider larger screens. International Data Corporation (IDC) also documents that the fourth quarter of 2020 saw international shipments boost for the sales of 91.6 million units of PC which is equivalent to a 26.1 percent difference when compared to the fourth quarter of 2019.

Information from Gartner also shows that laptops and notebooks global shipments summed up to 79.4 million units in the fourth quarter of 2020, which is equal to a 10.7 percent increase from the fourth quarter of 2019. The initial results by Gartner, Inc. for the year also shows that PC shipments attained 275 million units in 2020, which is a 4.8 percent increase from 2019 and the highest growth in a decade.

The increase in the remote workforce has been an advantage to a lot of PC hardware producers. The necessity to have a functional and efficient working area influenced the decision to set up high-quality workspaces at home. This necessity subsequently led to the surge in acquiring PCs, monitors, and other required gadgets.