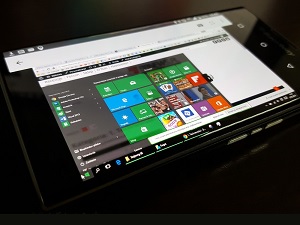 Windows 10 is on a lot of devices around the world. In part, that’s because it’s a significantly better and more modern operating system than its predecessors. In addition, it’s partly because Microsoft has been aggressively pushing people to upgrade to Windows 10.

While it took the company a bit longer to reach the magic billion device mark, they’ve recently done so.

That is, according to Terry Myerson, the former head of the company’s Operating Systems Group, who initially announced the company’s one billion device goal back at build 2015.

As of now, the company proudly reports that they have slightly more than one billion active monthly devices in use for all flavors of Windows 10 combined. Note that this includes Windows 10 variants running on:

There was some concern that the company wouldn’t hit the vaunted number; a concern driven by two factors:

First, the company made the strategic decision to back away from, and then entirely pull the plug on, the concept of the Windows Phone. That drew down the number of new installation estimates.

Second, there’s the fact that a surprising number of users are still clinging stubbornly to their Windows 7 and Windows 8 installations. They’re still keeping them, even though Windows 7 has reached the end of support and users of the aging OS are at increasing risk.

Nonetheless, despite these challenges, the company hit the number they were after. In a related note, there are reports that they now have an impressive 17.8 million registered Windows Insiders testers. That gives them a robust population of users to try out new features and recommend improvements for the company. Kudos to Microsoft for reaching a long-sought milestone!